The Bank of Finland ensures the availability and issuance of cash as part of the Eurosystem. It withdraws unfit banknotes from circulation and replaces them.

Amount of cash in circulation continued to increase steadily

Cash issuance increased further in 2018, despite media reports of a waning trend in the use of cash.

Compared with 2017, 8% more EUR 50 banknotes were issued. Greater numbers of both EUR 50 and EUR 20 banknotes are issued than returned to the Bank of Finland. As ATM denominations they are easy to withdraw, and they are also often taken abroad.

Other denominations are issued in small numbers, or the number of banknotes returned to the Bank of Finland exceeds that of new banknotes issued (Chart 10).

There has been a steady reduction in the supply of cash services in general since 2000, a trend also reflected in the number of bank branches offering cash services. 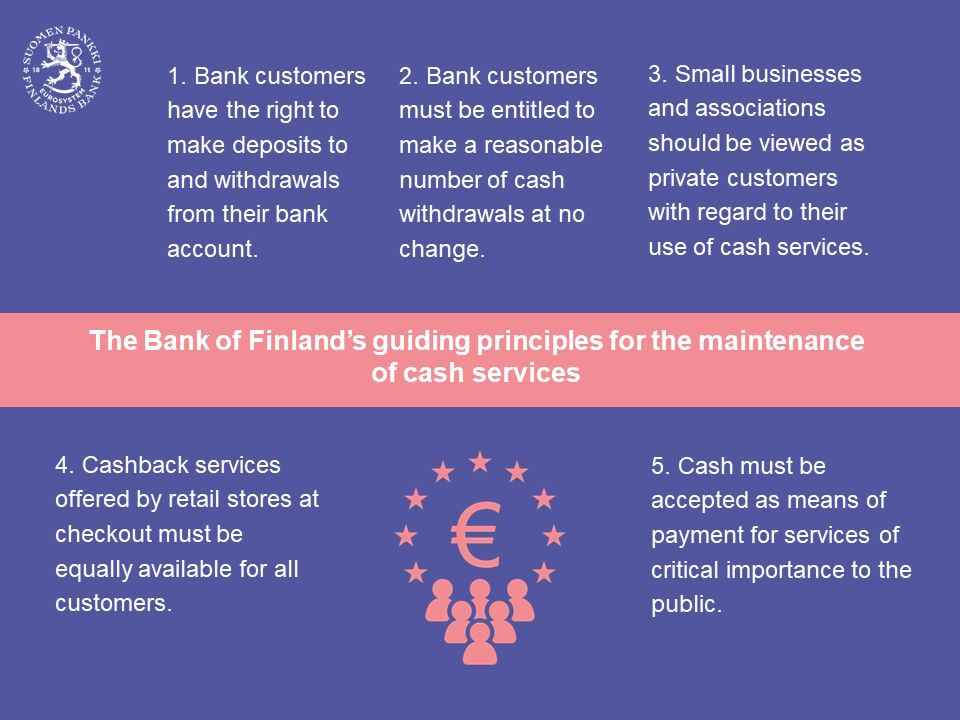 In the Bank of Finland's consumer survey conducted in October 2018, 84% of respondents were satisfied with the availability of cash. The share of satisfied respondents remained unchanged from 2017.

The share of those satisfied with the number of ATMs increased by 4 percentage points, to 66%. At the end of 2018, there were 1,339 ATMs operated by Automatia and 267 ATMs operated by other service providers, which meant a slight increase in the ATM network compared with the previous year.

The European Central Bank (ECB) unveiled the new EUR 100 and 200 banknotes in September. The architectural styles depicted in the EUR 100 banknote are baroque and rococo, while the EUR 200 banknotes feature 19th century iron and glass architecture.

The new banknotes are slightly narrower than the old, but their length remains unchanged. This makes the banknotes of the second series fit more easily in the wallet, yet allowing them to be recognised on the basis of their length. The Bank of Finland will start issuing the new banknotes on 28 May 2019.

At the end of the year, nearly 70% of the EUR 50 banknotes that came in for sorting were from the new series.

Banknotes are the responsibility of the ECB, whereas euro coins (link to bankoffinland.fi) remain under national competence.

In 2018, the Bank of Finland sold to the Ministry of Finance EUR 1 and 0.50 coins, as they were returned to the central bank in greater numbers than they were issued. The same phenomenon can also be observed for the other denominations, with the exception of EUR 2 and 0.05 coins.

Surplus coins can also be shipped to other euro area countries that have a shortage of coins. Only as a last resort are surplus coins melted down and their material recycled.

For instance, the Bank of Finland accumulates EUR 0.01 and 0.02 coins, as these small denominations are valid for payments in Finland, despite the practice of rounding up and down of cash prices. Instead of being destroyed, these coins have been exchanged with Estonia and Latvia for other denominations.

The Bank of Finland monitors the cash flows of its offices and regularly assesses their operations.

In June, the Board of the Bank decided to close the regional office in Oulu on 31 March 2019. With regard to the personnel, the closure was implemented by means of retirement arrangements and transfers to the Vantaa office.

The cash flows of the Oulu office have steadily decreased, and no reversal of the trend could be seen on the horizon. However, the Bank of Finland will not withdraw from Oulu completely and will seek to continue providing stakeholders in northern Finland with the tools to secure cash supply.

After the closure decision, a project was launched with the aim of purchasing the requisite cash supply services from private sector entities. In addition, the Bank of Finland will offer the parties involved in cash supply the possibility to use the Notes Held To Order (NHTO) custodial system. The cash held in the NHTO system can be transferred to the Bank of Finland's ownership in a separately agreed manner, and no physical cash needs to be placed in the custody of the central bank.

These solutions are aimed at further enhancing the local circulation of cash. In the future, the Bank of Finland will concentrate its operational cash supply and management activities at its Vantaa office.

Number of counterfeits slightly up

On the European scale, the number of counterfeits detected in Finland is very low, and the public can continue to trust their banknotes.

Share by email
Banks' joint ATM network and other ATMs